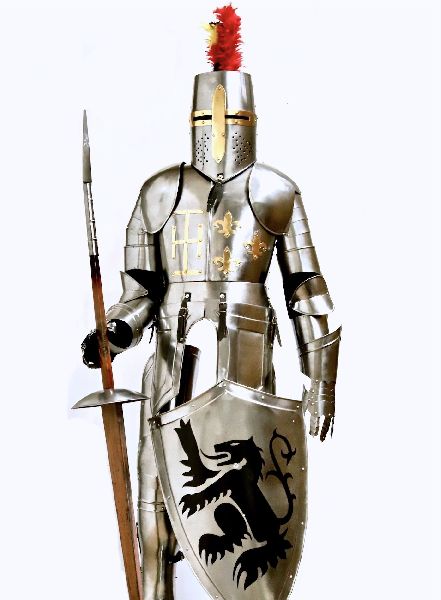 Mail, or chain mail, made of interlocking iron rings, which may be riveted, or welded shut is believed to have been invented in Eastern Europe about 500 BC. Gradually, small additional plates or discs of iron were added to the mail to protect vulnerable areas. Hardened leather and splinted construction were used for arm and leg pieces. A coat of plates was developed, an armour made of large plates sewn inside a textile or leather coat.

When one thinks of armour in a general or historic sense one normally conjures images of the style of armour (or armor) worn by History’s King Arthur and his knights of the round table, Galahad, Lancelot and the rest of the warriors of Merlin. The bulky metal, full body suits that were more likely to disable an enemy by blinding them with the sunlight reflecting off the shiny exterior than they were through the accuracy of where the knight pointed his jousting stick. Spare a thought for the poor horses that were taken with carrying these heroes, burdened with weight of the chain mail, broad sword and shield.

Think a little harder and one would recall other variants of a soldier’s armour that have been used around the globe from the ancient times of the Greeks and the Spartan Warriors of 300 infamy with their bodices of mounded leather and bronze helmets with plumes of hair tall enough to rival the Mohawks of the 1970’s punk rockers.

From the epic battles of the Spartan warriors against the armies of Persia, one would naturally follow the evolution of armour to the next logical (lion’s) pit stop to recall the great Roman gladiators like the legend that is Spartacus or Russel Crowe’s eternal hero, Maximus, battling in a crowded Coliseum for the sport of Caesar. By this stage in our history, technology had advanced far enough that we were able to shape the steels and metals (like nickel, bronze, copper even silver and gold) into forms designed to both protect the wearer and to intimidate the enemy. Angels and Demons are strongly represented in the silhouettes of armour throughout the ages.